I consider Twitter a never-ending flow of text and media. Even when using lists or filters, you can’t help feeling like you are missing out on information. Ideally, you should tweet when your followers are checking their feeds, which is a very challenging task. One solution is scheduling your tweets, so that they get posted at predefined times.

There are services out there like Hootsuite and Buffer which help you with this task, but only the top tier paid plans offer some flexibility. Since the Twitter API is fairly open, I decided to put together a Python script to schedule tweets with the option of attaching images. I have been using it for months now, and I think I have ironed out most bugs and quirks associated to it.

I wanted the system to be flexible and ubiquitous, so I’m using a simple text file to hold all the tweets that will be posted. This file is in one of my folders in Dropbox, so that I can access it from pretty much any computer or mobile device connected to Internet. Images to be tweeted are also placed inside a predefined folder in Dropbox.

Each scheduled tweet is in a separate line in the text file with the following syntax:

The image_filename.ext is optional, so it can be omitted (keeping the pipe symbols) if you don’t want to include an image with your tweet. Abbreviations for days of the week can also be used, and several posting dates and times can be setup for a particular tweet by separating them with commas.

So, for instance, the following line: 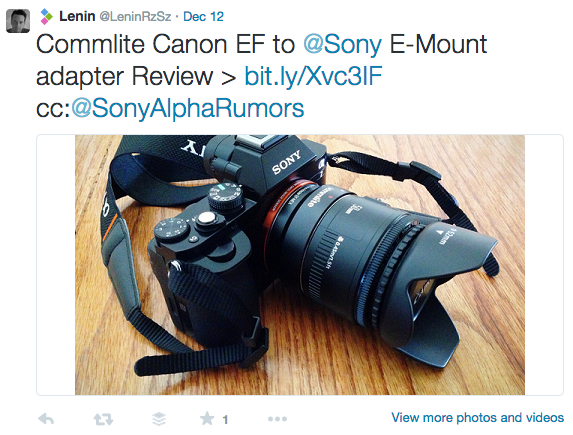 As another example, if you wanted to tweet movingelectrons.net rocks! on December 4th at 11pm and on Mondays at 8am with no image attached, you would have to include a line in the text file with the following:

The a at the beginning is a flag to indicate the tweet is active. So, if you wanted to stop tweeting that line but keep it in the text file as reference or to be tweeted in the future, you can just replace the a with a different character, like x.

Since this is just plain old text, you can use iOS apps like Launch Center Pro or Drafts to quickly access your tweet file or come up with automation workflows.

The scripts integrates with Pushover app. So, if one of the tweets fails to be posted for any reason (e.g tweet larger than 140 characters after the Twitter API links to the attached image), the script will alert to a mobile device with a short description of the error.

Full disclaimer: Although I worked with several programming languages in my college days, I don’t consider myself a programmer. I write scripts out of the enjoyment of creating things. All the scripts in this site work and do what they are supposed to do, they may not be written in the most elegant way. If you think you can improve them, feel free to so do, I’ve placed them in GitHub. You can also use part of this code as long as you link back to this site.

You can find the Python script below, or you can just download it from GitHub here. I will go over the main sections here and will briefly explain how it works. However, if you have questions, feel free to leave a comment below or send me a message. I’ll reply back as soon as I can.

After importing all the needed libraries, two key variables are defined: folderPath stores the path where the Twitter text file will be stored. folderAttach stores the path to the folder containing the images to be posted. Note that in the script above, these paths point to subfolders inside Dropbox. That’s the way we’ll be interacting with Dropbox instead of using their API.

schFilehas the name of the text file holding all the scheduled tweets. The variable postInterval holds the amount of seconds back from the time the script is run, in which tweets will be allowed to be posted. In this case, 3000 seconds (i.e. 50 min). I could have used 59 minutes, but I didn’t want to take chances of tweets not being posted because of differences in time. So, for example a tweet like the following:

Would really be posted at 9:00 am, which is the next time the script would run in my machine. Keep in mind that the Synology box has been set up to run this script every hour, I don’t really need the script to run at a higher frequency. If you are using Cron to run recurring scripts on a Linux machine or a Mac, you can find information on how to set it up here.

Continuing with the script, your Twitter credentials are then defined, followed by the functions for sending a message through Pushover, the function for posting your tweets and the function for determining if it is time to post a particular tweet. These functions are called from a loop that goes through every tweet in the list/file. This loop is located in the the main body of the script, towards the end of it.

I hope you find the script useful. Let me know what you think in the comments below or if you would like a feature added.